Tuesday was a difficult day at the office for everyone involved at Rosewood Furniture Gallery, located in downtown Great Bend. The Gallery's one and only manager Sandy Smith was saying goodbye on her final day there before retiring. Tears fell like rain as the manager and her client-employees grasped the magnitude of the moment. It was the end of a mentor-employee relationship that began more than 11 years earlier for some at the Gallery.

"We are one big family here, so it's hard for me to leave and it's hard for them to see me leave," said Smith, who turns 67 in April. "I'm going to miss them, but I felt it was time to retire. I'll still come by to visit and I'll be involved in other Rosewood events, so we will still see each other. But today is a very hard day because I've been a caregiver to them for a long time." 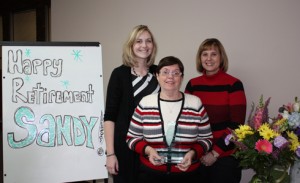 She said she is looking forward to caring for her grandchildren and enjoying her new freedom, which will include some traveling. Retiring will also allow her to focus on improving her health in continuing to battle a benign brain tumor that was diagnosed six years ago.

"Sandy has been such an important part in the creation and success of our organization," said Tammy Hammond, Rosewood founder and executive director. "I'm grateful for her unwavering support and for her dedicated service to people with developmental disabilities. I am happy for her, but I will miss her being an everyday part of Rosewood, like she has been since our beginning."

Smith started with Rosewood Services when it opened in May 1998. She began by working in the Day Services Department, where she also fixed some meals, passed out medicines, worked with lawn crew, and did whatever other tasks that needed doing.

"I've been a jack of all trades at Rosewood," recalled Smith. "When we opened, we were small and we only had about five staff members for about 20 clients. Back then, you did a lot of jobs and you learned fast and it was really busy, but we all had fun doing what we did. I've loved every minute of working here at Rosewood."

Smith formed a bond with Hammond when Hammond served as case manager to Smith's younger sister, Kandi Pedigo, who had Down Syndrome. When the new agency opened, Pedigo immediately transferred. It was a good decision, said Smith.
While Pedigo died nearly four years ago at age 40, Smith said her sister lived far longer than she was expected to live and she enjoyed an enriched life at Rosewood Services.

"My little sister loved it here at Rosewood," said Smith. "She loved to come to my house for the holidays or to visit, but at night, she wanted to go back to her house. That was her home. She developed independence at Rosewood."

Smith took over the Furniture Gallery as it was being built in 2001. In November that year, it opened. During the first nine months, Smith operated the Gallery with her husband, Randy. They oversaw six clients working with a select few furniture pieces, which were sanded, stained, varnished and assembled for retail sale. Today, that same process occurs, but with more than 15 client-employees working daily to prepare an expanded selection of solid-wood furniture pieces for retail sale in the community.

In August 2010, Smith and Rosewood Services were presented Excellence Awards by then Kansas Gov. Mark Parkinson in Topeka. Smith was nominated under the category of "an individual direct-service professional who currently supports persons receiving disability services and has demonstrated extraordinary commitment to the provision of high-quality, person-centered services."

Besides managing the Gallery for nearly a dozen years, Smith has led a Rosewood cleaning crew that has been contracted to clean different places during community events. Most weekday mornings, during breaks at the Gallery, Smith and clients could be seen walking downtown to meet people, pull weeds, or water flowers to help maintain the downtown landscape. Smith views those small friendly efforts given over a long period of time as invaluable relationship builders between Rosewood and the community.

"I just have Rosewood written all over me wherever I go in the community and I'm proud to represent my company in that way," said Smith. "I like helping people and the clients like helping people. All these years, we've made a great team."