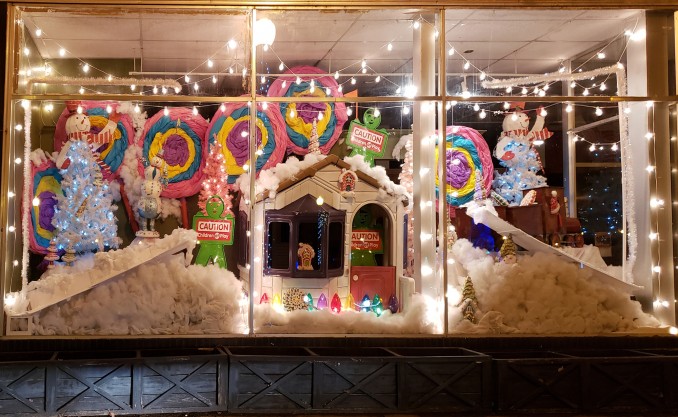 Drive through downtown Great Bend at night during this holiday season and you will marvel at the festively creative storefronts that light the way. While Christmas window decorating is a normal occurrence each holiday, this year’s window decorations are extraordinary due to the inaugural Christmas Window Decorating Contest, which included an incentive of $3,000 in prize money that was provided by an anonymous donor.

The results of the incentive-laden donation are unmistakable as 42 decorated windows were included in the inaugural “Best Christmas Window” contest. Winners were announced on Dec. 2.  Cornerstone Interiors Team took the Grand Champion award and were provided $1,500 for having the winning window at 1405 Main, which was titled “Candy Land.” Yours Truly Gift & Flower Shoppe, 2017 Lakin, was named Reserve Grand Champion and was awarded $1,000 for its theme of “Elf’n Around the Christmas Tree.” Third place and $500 went to Loretta Miller at 2021 Forest for her theme of “Believe in the Magic.”

“I took my niece and nephew and my great niece downtown the night before Thanksgiving and I had to pull over a couple of times because I was impeding traffic,” said the window contest donor. “Just wow and super impressive. There were more decorated windows than I thought there would be. I find all of them joyful. I'm just glad that I didn't have to choose the winners.”

The difficult task of choosing winners went to a team of professional artists and interior designers. Judges for this year were Criss Palacioz, retired interior designer from Hutchinson; Teresa Hartman, crafter and decorator from Salina; and the team of Shafer Art Gallery directors from Barton Community College, Dave Barnes and Scott Beahm. They utilized a judge’s score card based on four criteria, which were General Presentation, Workmanship, Lights, and Originality.

The event was organized by the Rosewood Roots & Wings Santa Committee that also is associated with ‘Santas Around The World,’ the multicultural holiday exhibit, which is currently open for the season in downtown Great Bend. Boundaries for the window-decorating contest covered 10th to 18th Streets, and from Williams to Kansas Streets in Great Bend. There were no fees to enter, but participants were responsible for the cost of decorations. Applicants who did not have a store window to decorate were assigned a vacant window in downtown based on availability. Participants submitted their applications by Nov. 9 and judging for the window decorations took place from Nov. 21 – 25. 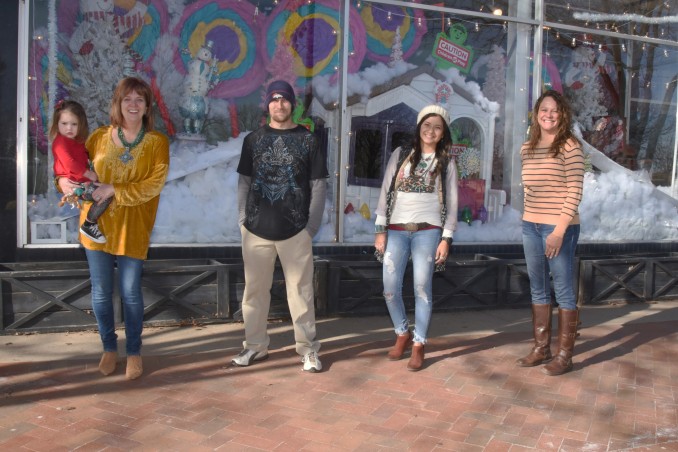 Grand Champion – Debbie Deutsch holds her granddaughter Harper, half of the inspiration for her winning window titled “Candy Land.” The Cornerstone Interiors Team helped with the window decoration. Pictured left of Debbie are Tyler Lynd, Patty Grauer, and Lisa Koochel.

The window that the Cornerstone Interiors Team decorated was the one that business owner Debbie Deutsch decorated each Christmas for 25 years before moving her business to a rural location in Barton County a few years ago. Coming up with a new design was an easy task, but getting the window done in a period of two weeks was the hard part. She needed the work of her team to help pull it together.

“It's not difficult to come up with ideas because my brain never shuts off,”  explained Deutsch. “I knew instantly what theme I wanted to do, I just had to find all of the elements. I used (granddaughter) Harper's play house, although it turned into a different color for the display. My other inspiration was my grandchild, Raymond. When I go to Kansas City, I play Candyland with him all the time.”

For the “Yours Truly Elves,” they started meeting and planning their Christmas window in late August, as soon as they learned about the contest. It turned into a group effort, led by store employees Katie Stansfield and Kaitlyn Robl, but also involved the complete Yours Truly team, including owner Amy Habiger. 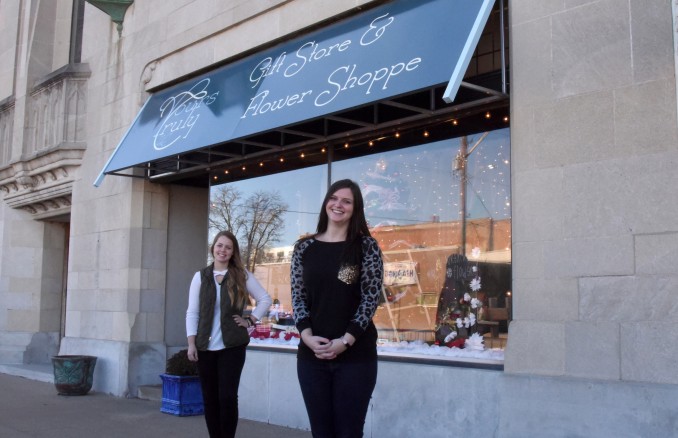 “Our theme fell together slowly and in pieces,” explained Stansfield. “We incorporated what we do in the business into our window design: Gift wrapping, flowers, and wreaths. We also included our signage.”

“We spent a lot of time on our windows,” added Robl. “We were very nervous about the contest and were hoping we would win. We are proud of the way our  display turned out, but we knew there are a lot of really good windows out there.” 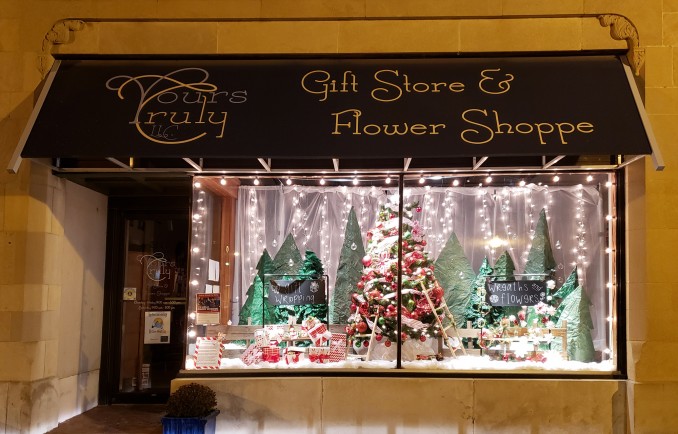 2017 Lakin, Yours Truly Elves, “Elf’n Around the Christmas Tree”

The Gallery Boutique hasn’t been open for several years, but former owner Loretta Miller still holds art classes at the location. As such, she had a lot of holiday decorations readily available to achieve her goal. Once she got started, the finished product didn’t take long, she said.

“It took about three days to complete the windows,” explained Miller. “I knew I wanted to use my vintage Mr and Mrs Claus because they are so fun. I didn't want to move my French doors so I had to incorporate them into my design. Everyone did such a great job putting this contest on. I appreciate the money. I’m going to spend it on more lights for next year.” 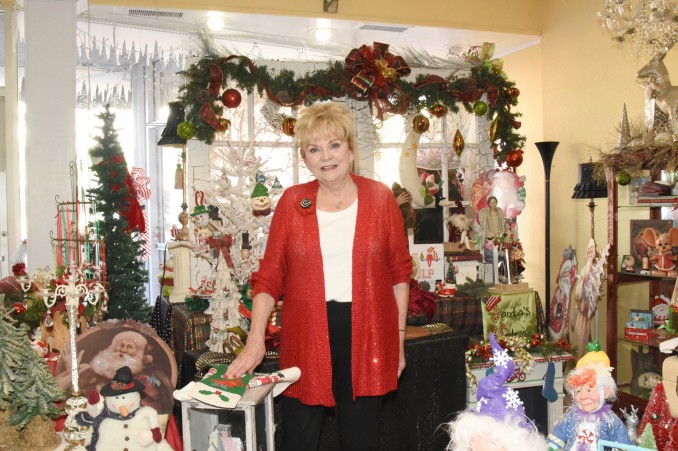 3rd Place – Loretta Miller stands in with her collection of Christmas décor.

Regarding next year, the donor has already committed to the second annual Christmas Window Decorating Contest. After such a stellar showing this year, however, the question becomes: What will window decorators do for an encore?

Those interested in seeing this year’s contest windows can view photos at santasaroundtheworld.com/window-contests-displays, or access the images at facebook.com/SantasAroundTheWorld. 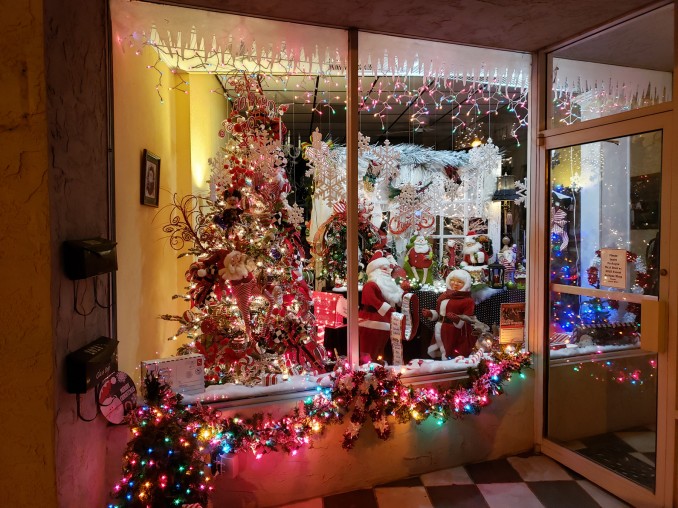