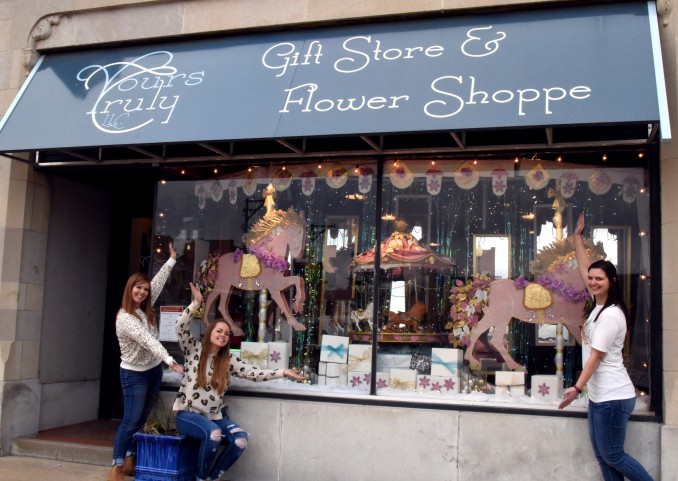 Grand Champion – Yours Truly business owner Amy Habiger (left), along with associates Kaitlyn Robl and Katie Stansfield frame their winning window, which includes a working carousel in the display.

The second annual Christmas Window Contest in downtown Great Bend has shown what businesses and decorators can do for an encore, following last year’s inaugural success. Thirty windows were decorated this year in hopes of being crowned “Best Christmas Window.” The second annual contest ensures that downtown Great Bend is once again merry and bright for the holiday season.

The anonymous donor who provided the incentive of $3,000 in prize money for the second consecutive year is impressed with the quality of this year’s windows.

“The windows decorated this year are done excellently,” said the donor. “I think they are beautiful and have made a nice addition to our downtown holiday festivities. We have had good weather and I’ve seen a lot of people downtown enjoying the atmosphere. A lot of them were walking downtown in the evenings; a lot of families with kiddos. I think we did a pretty good job of it this year.”

Winners were announced on Nov. 27, during festivities following the “Home For The Holidays Parade” in downtown Great Bend.  Yours Truly Gift & Flower Shoppe, 2017 Lakin, was chosen Grand Champion and was awarded $1,500 for having the winning window titled “Enchanted Christmas Dreams.” Pam Tracy with her decorated window at 1520 Main Street was named Reserve Grand Champion and was provided $1,000 for a theme titled “Christmas Wishes.” Third place and $500 went to Golden Belt Humane Society for its display at 2021 Forest, with the organization’s theme of “The Animals Christmas Eve.”

The task of choosing winners went to an independent team of professional artists and interior designers. Judges for this year were the same as last year: Criss Palacioz, retired interior designer from Hutchinson; Teresa Hartman, crafter and decorator from Salina; and Dave Barnes, Shafer Art Gallery director at Barton Community College. They utilized a judge’s score card based on four criteria, which were General Presentation, Workmanship, Lights, and Originality.

The event was organized by the Rosewood Roots & Wings Santa Committee that is associated with ‘Santas Around The World,’ the multicultural holiday exhibit, which is currently open for the season in downtown Great Bend. Boundaries for the window-decorating contest covered 10th to 18th Streets, and from Williams to Kansas Streets in Great Bend. There were no fees to enter, but participants were responsible for the cost of decorations. Applicants who did not have a store window to decorate were assigned a vacant window in downtown based on availability. Participants submitted their applications by Nov. 8, and judging for the window decorations took place from Nov. 18 – 20. 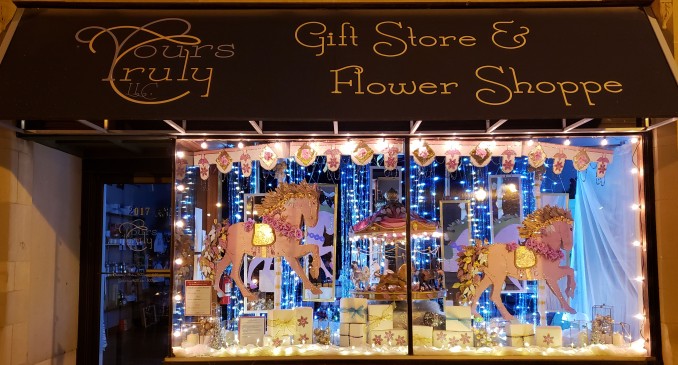 Check out video of the carousel in action.

After finishing as runner-up last year, Yours Truly store employees Katie Stansfield and Kaitlyn Robl started bouncing around ideas about a horse carousel theme for this year. Magically, Robl then discovered that her parents, Lawrence and Norma Robl, had an operational carousel stored in their barn for about a decade. Add in some carpentry skills by store owner Amy Habiger’s dad, Ken Shaffer, to build some wooden horses and the design flourished. Once all the materials were constructed and gathered, it took just two days to decorate the window, said Stansfield.

The horse carousel now runs every evening and the display has received rave reviews by people strolling by the store, or coming in to shop.

“We have people popping their heads into our store just to tell us, ‘We love your window;’ we even have new customers coming in because of our window,” said Robl. “That’s been nice to see the community’s reaction.”

Habiger said the extra attention to downtown businesses is what she most likes about the Christmas window contest.

“It’s nice to win, but the contest is more about the push to bring people to downtown,” she explained. “If people drive around to look at the windows, even coming from out of town because of the recognition, then the contest achieves its point of making Great Bend a destination location.” 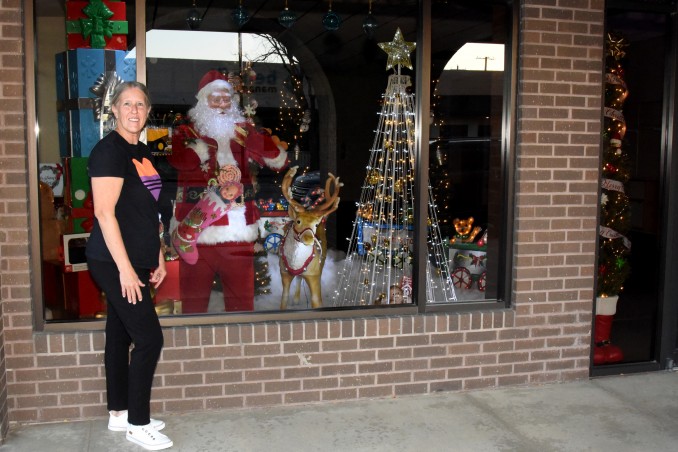 Reserve Grand Champion – Pam Tracy stands in front of one of the windows of her display titled “Christmas Wishes.”

For Pam Tracy, she knows she has been successful at getting people to linger at her window display. As proof, she merely has to point to the children’s hand prints and smudge marks on her window that she regularly has to clean off. And she’s overjoyed to perform that task.

“I hid little things in my display,” Tracy explained. “There’s a tiny elf in the truck and I did a jacket for Santa. A baby deer is hanging on the tree. I did an interactive window so that they would stay here and look for the different items involved with the display. It’s working. I have to come by to clean the smudges off where kids are looking through the windows. What a wonderful thing to have to do.” 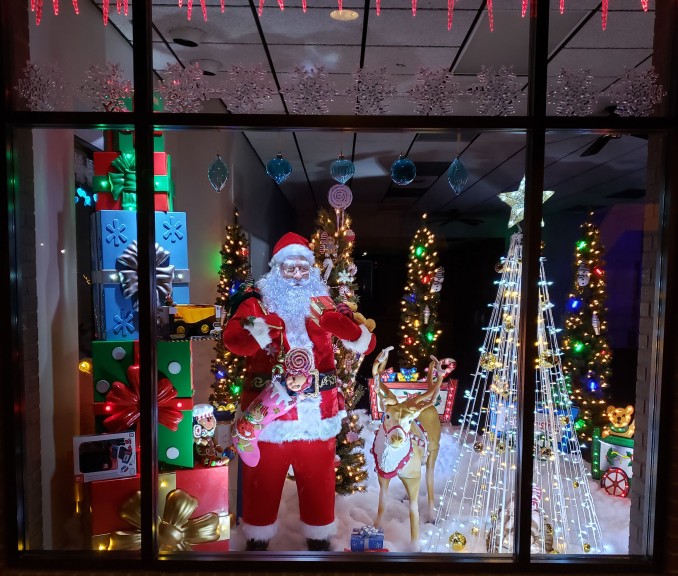 The other half of her display includes a unique Christmas tree. Tracy and her husband, Kenny, collected their empty water bottles and she glued them into a translucent Christmas tree. 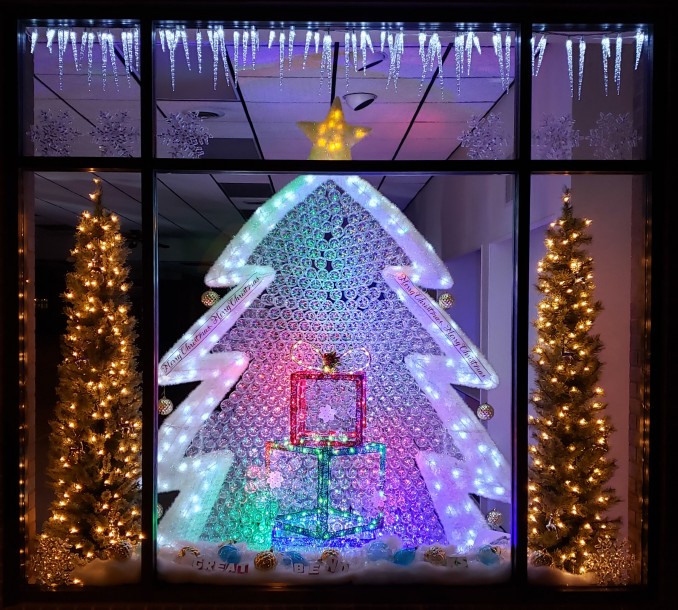 “I had a dryer box and just started filling it up with empty water bottles,” said Tracy. “My husband and I drank every single one of them for an entire year, and I even cut off all the paper labels from the bottles and made sure the bottles were dry.”

The Gallery Boutique, located at 2021 Forest, hasn’t been open for several years, but it has been the third-place window winner for two years in a row. This year’s window was decorated by Golden Belt Humane Society volunteers with the help of a “creative elf” who wishes to remain anonymous. 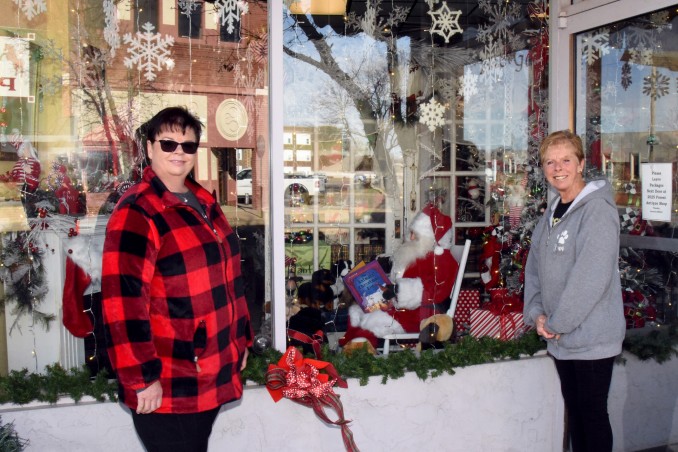 3rd Place – Jean Clair (right) stands with her sister Carla Jecha in front of the window presented by the Golden Belt Human Society to benefit awareness for “Adopt A Pet.”

“She wanted to help our organization decorate with the idea that we might win a prize,” said Golden Belt Humane Society Board Member Jean Clair about the anonymous helper. “She and I, along with Terri Schettler, decorated for days.”

Clair said the $500 prize is going to the organization’s Adopt A Pet program that pays for spay/neuter, vaccinations, surgeries and other needs of the sheltered animals.

“The display is absolutely beautiful at night,” exclaimed Clair. “someone made the comment that this window is so inviting that you just want to go in and sit on Santa’s lap and have him read to you.” 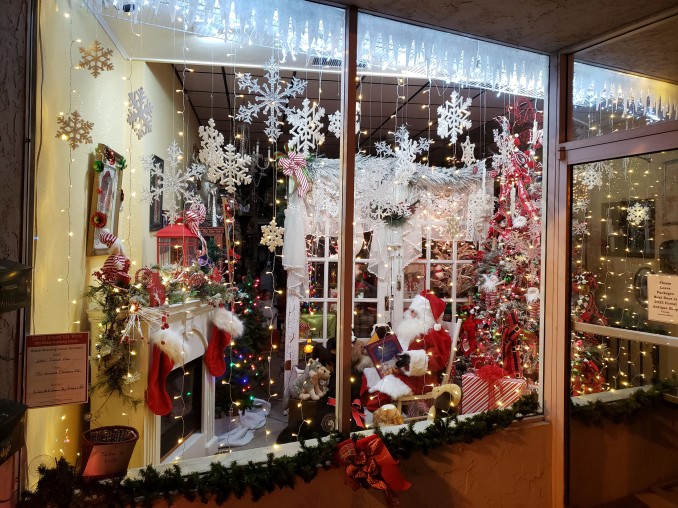 Regarding next year, the benefactor has already committed to the third annual Christmas Window Decorating Contest. However, she is considering changing the format to award more participants next year.

“I think we might have a few more honorable mentions next year,” she said. “I do like the idea of having more winners, at least a little bit to cover the cost of window decorating for more of the participants. I’d also like to see all stores put lights in their windows to make our downtown even brighter. I’m sure we will figure out ways to enhance this contest moving forward.”

Those interested in seeing this year’s contest windows can view photos at santasaroundtheworld.com/window-contest-displays-2021, or access the images at facebook.com/SantasAroundTheWorld.