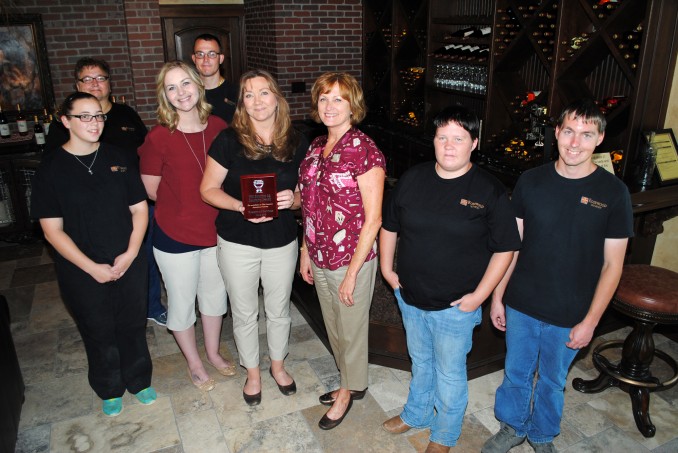 “We would like to extend our heartiest congratulations,” wrote Terry Weinacht, general manager of Mid America Ag Network in a letter that was presented to Tammy Hammond, Rosewood Services founder and executive director. “It is reassuring to know that those who work so hard (do) achieve the recognition they deserve. Your contributions to the Heartland’s Agriculture Industry have not gone unnoticed and your accomplishments and hard work put you into a selected group of people within our area.”

The mid-June show was conducted by Mid America Ag Network host Craig Mead, who interviewed Michael Dawes, director of marketing at Rosewood Services. The show covered many aspects of Rosewood from the services and supports the agency provides to the unique and innovative aspects of the business, which include a ranch, winery, greenhouse, bee farm, studio arts, industrial kitchen, furniture store, and a retail wine and gift store in downtown Great Bend. All areas of the business focus on providing diverse opportunities for people with developmental disabilities.

“I thank Mid America Ag Network for recognizing the efforts of everyone involved with Rosewood Services, said Hammond. “Rosewood exists today because those we serve embrace the opportunity to be involved in life and to be productive in ways many people would have declared impossible. Working on a ranch, tending cattle and horses, growing tomatoes to be sold, producing wine at a farm winery – these are jobs and experiences that truly make a difference in the lives of those we serve. In turn, they contribute greatly to our community.”