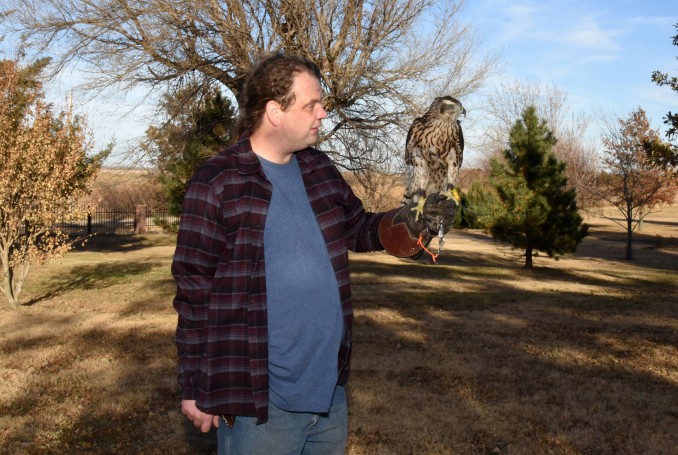 Bird in Hand: Great Bend artist Jeremy Cale stands with a Northern Goshawk perched on his wrist on Tuesday while a group of falconers were hunting at Rosewood Ranch. Observing the hunt with several birds of prey and getting the chance to interact with them was a “dream come true,” for Cale who has aspirations to become a falconer someday.

Great Bend’s Jeremy Cale can spend hours immersed in the world of raptorial birds,  observing them in the sky, watching documentaries about them, and even viewing them in photographs. He knows a lot about birds of prey, having spent a lifetime studying them. As a nature artist, much of his art even reflects his fondness for the magnificent creatures. He is currently in the process of sculpting a beautiful, full-sized Golden Eagle statue.

“I’ve been interested in raptors and falconry my entire life,” said the 38-year-old. “It fits with everything I love about nature, and creating art around nature is my one true purpose in life.”

Cale is different than most artists in one respect. He lives with Asperger’s Syndrome, an autism-related developmental disorder, which creates challenges for him in life, but enhances his gift of seeing the world through a different artistic lens. For more than 19 years, Rosewood Services has been with Cale, helping him to balance his life with his focus and passion for art, so that he can live independently.

Earlier this week, Rosewood Services CEO Tammy Hammond, who is also Cale’s guardian, helped him experience the remarkable world he has only observed from afar for more than three decades. The North American Falconry Association was in Great Bend for its annual field meet. That gave Cale a chance to be around a few hundred falconers from as far away as Holland and Australia. He also got to closely observe approximately 70 birds on perches, a combination of different types of eagles, hawks and falcons.

Cale spent much of Monday at the weathering yard on 9th street between Madison and Monroe in Great Bend. Falconers used the yard to stage their birds in preparation for a hunt. Cale communicated with some of the falconers, finding out more about the birds and the sport.

On Tuesday, Hammond arranged for about a dozen falconers to hunt their birds at Rosewood Ranch, five miles north of Pawnee Rock. Cale tagged along observing the activity as the birds hunted rabbits, pigeons and sparrows. 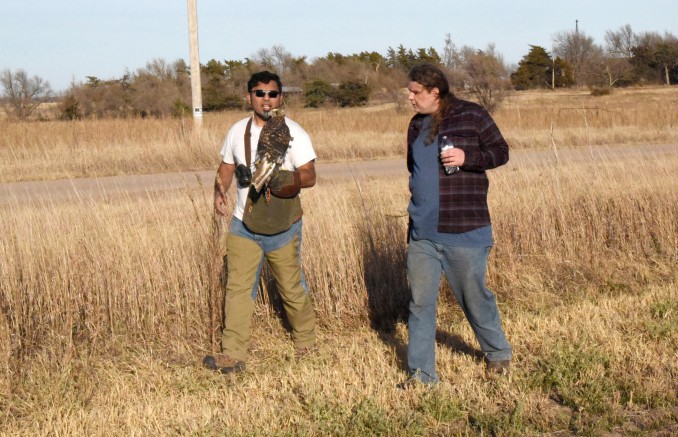 Hawk Talk: Ryan Anthony, a falconer and wildlife biologist from Iowa talks with Jeremy Cale about falconry as they walk the field while his Northern Goshawk is preparing to hunt rabbits at Rosewood Ranch on Tuesday. Anthony, along with his wife Holly, also a falconer, and their infant son, made the 10-hour trek from the Quad Cities area for the national field meet. Since NAFA began having the annual field meets in 1962, this was the first one held in Great Bend. “It’s almost like it was meant to be,” said Cale, realizing the rare opportunity to experience the national group in Great Bend.

“On a scale of 1-to-10 with 10 being the greatest ever, this experience has been a full 10 for me,” Cale expressed after his second day interacting with the falconers and their birds. “It was wonderful for me to be around this environment the past two days and actually talk with the people who do this as a way of life.”

“The yard was more conversation where at the ranch, I got to see the birds in action and I had more interaction with the birds,” Cale continued. “They were both great experiences, but they were two completely different experiences that I will never forget as long as I live. Falconry has always been something I’ve wanted to do at least once in my life, and I got to finally realize a lifelong dream this week.”

One of Cale’s most memorable experiences was when Ryan Anthony, a falconer and wildlife biologist form Bettendorf, Iowa, gave Cale his glove and perched a Northern Goshawk on Cale’s wrist. A nervous moment to be sure, but Cale said it was a moment he was ready for.

“I wasn’t that nervous; I was just happy to be able to do something that other people may never get a chance to experience, having a bird of prey perched on my arm,” explained Cale. “When I had that hawk on my arm, it felt like it should have been that way for a long time; that I should have a bird like it on my arm as a falconer.”

“Most falconers’ ultimate goal in life is to go for the biggest bird they can get, but I would be very satisfied with a Red-tailed Hawk,” Cale explained. “They are my spirit animal, they are native to the area, and they are such beautiful birds to watch fly and hunt.” 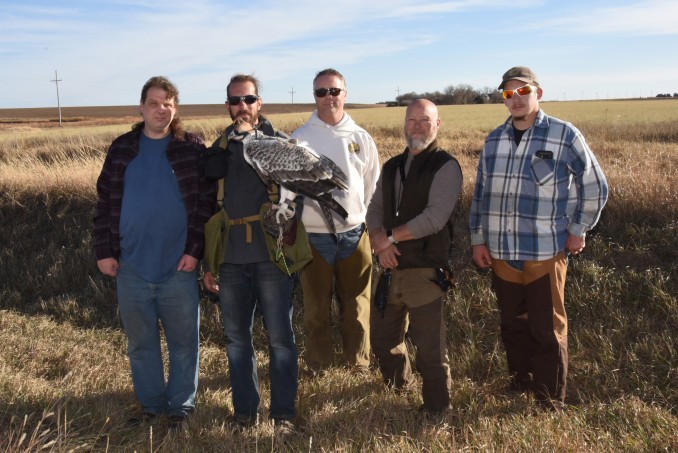