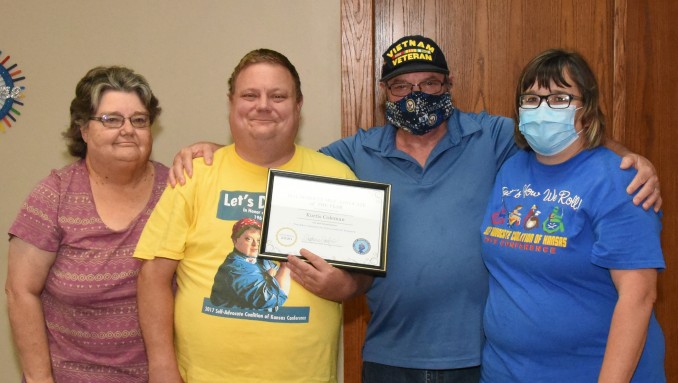 The first encounter Self-Advocate Coalition of Kansas representative Stephanie Sanford had with Rosewood Services’ Kurtis Coleman was four years ago when she mistakenly ended the SACK Conference dance two hours earlier than advertised. Coleman emphatically addressed the issue with her. Fast forward to last Saturday and he was recognized by Sanford for receiving the “Hal Schultz Self-Advocate of the Year” award.

“He made a huge impression his first year of attending the conference,” recalled Sanford to the remote group attending this year’s virtual SACK Conference, appropriately titled “The Year of Adaptive Challenges.”

Sanford remembered telling Coleman four years ago, “We’re going to take care of this for next year and we’ll have a dance till midnight, but the only problem is that if you’re going to advocate for midnight, you’re staying till midnight with me. And he did.”

Since that time, Coleman has been integrally involved with the SACK organization, even taking part in the Kansas Leadership Center, and serving this year as the SACK Conference planning chairman. SACK is a statewide advocacy group comprised of adults with intellectual and/or developmental disabilities. SACK encourages and teaches people to speak up for themselves and to obtain the highest possible level of independence.

“He is always there when I ask for someone to be involved,” Sanford told the SACK Conference attendees during the presentation. “He always makes me laugh, and man, I wish I could give you a big ‘ol hug right now, Kurtis.”

Coleman accepted his award at the Rosewood Activity Center in downtown Great Bend. His parents, Daniel and Teresa, were in attendance to watch him receive his award. Also attending and coordinating the conference on the local front was Rosewood Miracle Workers AKTION Club sponsor Frankie Pelster. She learned two weeks earlier that he was going to win the organization’s award and was able to prepare for the presentation without alerting Coleman.

“When my parents showed up at the conference, I thought that was different, but I was still surprised to win the award,” explained Coleman. “When I heard Stephanie start talking about what happened my first year at SACK Conference and the dance ending early, I knew that I was the recipient. It’s still a shock to me. It’s nice; it’s real nice. I had no idea that I would win an award like that until that moment. I never expected something like this, but it feels great.”

Besides his involvement with the SACK organization, Coleman is an active volunteer in the community, which includes his integral role in service projects with Rosewood AKTION Club. He volunteers for RSVP and Volunteers In Action, Golden Belt Humane Society, Meals on Wheels, and University of Kansas Health System - St. Rose Medical Pavilion.

“I just like being around people,” Coleman explained about his activism and jovial disposition. “I try to be a role model to others, and I hope that I am.”

Pelster said Coleman definitely is a role model to other members of Rosewood AKTION Club.

“Kurtis is empowering his peers to want to do more, which is a positive development within our AKTION Club,” Pelster explained. “Being located here in central Kansas, we sometimes think that people don’t hear us, but because of people like Kurtis and the things that he has learned the last few years, he has actually given people here a voice that they never thought that they had before. We are so proud of him for his achievements and for the statewide recognition he has received.”